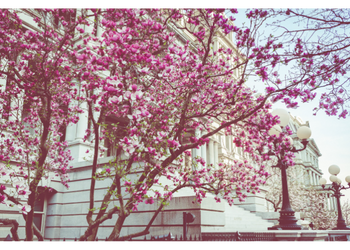 Change has Come to Washington: What are the Possible Impacts on the Grant Funding Landscape?

We have been getting a lot of questions about what to expect over the next months and years when it comes to federal grant and contract funding streams. We have a change candidate elected to the White House and we have same-party majorities in the U.S. House of Representatives and Senate. This creates the potential for a more dynamic grant landscape than we have had in a long time. As countervailing forces, we have the processes, power division, and overall heft of the federal government.

Covering this topic, even at a basic level is complex, so we are breaking content into a four-part series. This first article is a refresher on federal grantmaking and budgeting. Subsequent articles will detail anticipated shifts in federal funding, how existing funding impacts New Mexico, and how government and nonprofit agencies may want to adapt their grants approach.

How is a grant born?

To understand the potential changes in the grant landscape, we first need to understand how grants are created. In part this depends on the grant type (formula, block, program, or entitlement) and the general way it’s funded (via mandatory or discretionary spending). We’re going to focus on the type that are awarded through open competitions.[1] Those are what most of us think of when it comes to seeking federal funds directly from the federal government by applying to a call for proposals. Most competitive awards are program grants funded through federal discretionary spending, which is determined through annual spending budgets.[2] Discretionary funding totaled $1.2 trillion in FY 2016.[3]

Competitive awards from discretionary funds (also known as project grants) come in two flavors: grants and cooperative agreements. As they are similar, we’ll simply use the term grants to describe both.

Grant creation and policy development is governed by the Federal Grant and Cooperative Agreement Act of 1977.[4] The basic process for establishing a new grant is that Congress develops and passes legislation such as laws, regulations, and budget appropriations to establish a grant program. The President and executive branch are then able to massage the implementation by issuing Executive Orders (EOs) and other official guidance. That guidance must fit within the legislative framework and purpose. Next, the administering agency (e.g., the Department of Health and Human Services) creates administrative policies and procedures related to the grant process, grantee expectations, and for their own agency, as needed, to support the grant.

The point when a grant is really “born” is the next step, when it appears in the Federal Register. The Federal Register is the daily journal and official record of the federal government. Besides posting grants (which fall under “notices”), the register issues proposed rules, enacted rules, presidential documents, notices requesting public comment, and documents available for public inspection.

This register listing does not always guarantee that awards are paid out. A key point to understand is the difference between authorization and appropriation of discretionary spending. A discretionary grant program that is authorized has legislation backing it up but the piggy bank is empty until funds are appropriated.

Authorization laws can set out specific amounts of appropriated funds and the authority for Congress to appropriate funds. The establishing authorization addresses timelines, which can be for specific fiscal years, be set permanently, be subject to periodic renewal, or remain in place until changed by Congress.

The funding appropriation is when a grant program gets funded. There is typically a long timeline for developing grant instructions, holding open grant submission cycles, coordinating federal reviews and reviewers, and ultimately determining a portfolio awarded proposals. Because budgets are typically last minute and often don’t cover the full fiscal year, federal agencies often have to release calls for proposals without having the funding in hand.

While it’s rare, we have worked on a couple of federal grants for clients that were issued, held submission cycles, then didn’t get funds appropriated. After the heavy lift of preparing a federal grant, applicants were informed that no awards would be made. This is a real, big, ugly bummer.

How does that budget appropriation happen?

The federal fiscal year runs from October 1 and ends September 30 of the following calendar year. The discretionary spending that fuels most grants is part of annual spending approved by Congress through the budget process. There is a lot of ink explaining how this happens. We like this simple but informative infographic, “A guide to the federal budget process,” from the Washington Post.

Under current budget law, the President must submit a budget to Congress for the upcoming fiscal year between the first Monday in January and the first Monday in February. This hasn’t happened yet, but that’s not unusual: incoming presidents are cut some slack and the submission can also sometimes be delayed by negotiations. The White House has said that the presidents Fiscal Year 2018 budget will be released this Thursday (March 16).

The President’s budget then goes to the Appropriation Committees of the House and the Senate. It also goes to the Congressional Budget Office (CBO); which analyzes short and long term costs of the budget proposal against a baseline budget representing a scenario where spending and revenue are held at current rates and projects as if no new legislation takes effect.

This is usually complete in March, when—CBO analyses in hand—the 12 budget appropriation subcommittees begin their work in earnest. You see, the federal budget is not a single budget. There are 12 budgets, some/all/none of which might get passed. Each is developed by an Appropriation Subcommittee with a specific spending domain (e.g., Defense). Well, there are actually 24 budgets and subcommittees as both the House and Senate develop their own versions.

Getting budgets passed involves a lot of back and forth resolutions, reconciliations, and other opportunities for delay and disarray with the possible, but frankly improbable, outcome that we get a normal full budget passed before the new fiscal year.

What is typical these days is that some of the 12 bills get passed before the start of the fiscal year. For areas without passed appropriations, Congress can enact a continuing resolution, to temporarily fund operations or shut down that particular area of government spending.

What About the Current Fiscal Year Budget?

Instead, the 114th Congress (which finished in early January) passed a continuing resolution extending funding at prior years’ levels through December 9, 2016. When that deadline loomed, they passed another continuing resolution that extends funding of the government through April 28, 2017.

The second resolution was passed after the election and is set to expire before the fiscal year ends, based on the desire by the Trump administration to have some say over current fiscal year spending. The President’s input and the will of the GOP majorities could include some changes to FY2017 grants funding but so far there are not indications of significant grants changes during the remainder of FY2017.

[1] The Federal government also makes formula funding awards, which are noncompetitive funds based on a money-per-person/service/match formula, and entitlement grants.

[2] There are some important block grants that come up for governments and non-profits like Community Development Block Grants, AmeriCorps funding, and various housing, medical, and childcare programs.

[3] The other top level spending areas are mandatory spending (determined by legislated obligation) and net interest costs on debt.

[4] The act text can be accessed at https://www.gpo.gov/fdsys/pkg/STATUTE-92/pdf/STATUTE-92-Pg3.pdf but Grants.Gov has an easier to digest summary at https://www.grants.gov/vi/web/grants/learn-grants/grant-policies.html.